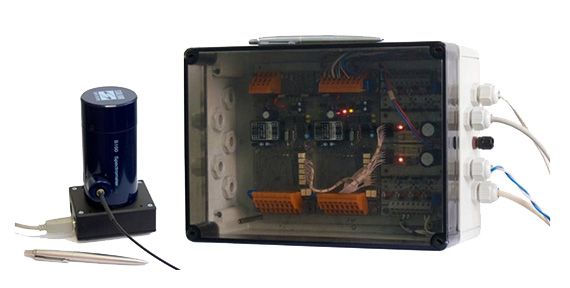 The task of the reproducibility of the properties of film coatings of complex composition formed by vacuum-plasma technologies, can be solved with the help of the automatic flow control process gases.

Ion-plasma technologies, plasma and ion-beam coatings are widely used to form films for various purposes, and chemical composition, including oxides, nitrides, carbides, carbo-and oxynitrides materials. The vacuum system for the implementation of such technologies should include a system of cost control process gases, which primarily ensures the quality and reproducibility of the characteristics of the films. The high cost of products, which are applied to the coating, as well as the tendency to increase the productivity of plants by increasing the processing volume and the number of simultaneously processed surfaces impose stringent requirements on the characteristics of a system of cost control emissions.

Optimization of the quality and economic performance of surface cleaning and coating is achieved by dynamically controlling operating costs of gas. The reason for this is that the technologies considered one of the most critical parameters determining the characteristics of the coating, is the flow of working gases. The following describes a highly reliable controller automatic control of gas flow by means of which achieved reproducible coating of a given chemical composition.

Algorithms for flow control of gases in the ion-beam surface cleaning is reduced to maintain a constant level of ionic current sprayer or pressure in the vacuum chamber by controlling the flow of inert or reactive gas. For ion-beam deposition of coatings technology given composition must be maintained at a constant ion current, and spray the mixture of inert and reactive gases by means of cost control these emissions. For the ion-plasma technologies (magnetron) coating of complex chemical composition appropriate to use the optical control algorithms, which lead to registration with the intensity of the optical sensors of one or more control elements (spectral line, molecular band) emission of the optical spectrum of the discharge and the development of signal controlling the gas flow in real time.

In order to implement these algorithms we have developed a controller that can be adapted to a wide range of technological facilities. As the sensor controller can be: vacuum gauges and pressure sensors, optical sensors control the intensity of the spectral components of the discharge and ion sensors, and the discharge voltage and current dispensers. Actuators are leak valve gases, specifying the flow rate of each of the working gas and forming the desired mixture of inert gas with one or two rockets, as well as the switching valve for switching the gas mixture in the spray. Management leak valve and valves made of algorithms, depending on the number of ion sources and atomizers, the sequence of their work, single-layer coating composition and structure of the multilayer coating. For the basic variant of the controller can be simultaneously connected to up to 8 analog sensors, up to 6 leak valve and the required number of discrete sensors and actuators. If necessary, the controller can be connected to the number of sensors and leak valve more than this.

Block diagram of the controller is shown in Fig. A. The controller consists of sensors, the system unit, managed leak valve and valves. The system unit is built on the principle of a distributed system that improves the reliability of its operation. The system unit contains the following main parts: the central microcontroller, power supply, keyboard, LCD and LED display, sensors and microcontrollers leak valve. Each block of the system control unit has a self-test system to display the results to the operational definition of the problem. The design of the system control unit is suitable for quick replacement of the defective unit. The controller can be connected to a PC via RS232. Exchange of information between the microcontroller is via CAN bus, which makes possible the removal of the sensors and microcontrollers leak at a considerable distance.

The controller manages the flow of gases for ion cleaning processes, as well as the deposition of films of chemical compounds of metals with reactive gases, magnetron and ion-beam spray in sequence and given the number and thickness of the layers. By controlling the flow of working gas is provided by the constancy of the pressure in the vacuum chamber for ion cleaning, the constancy of composition of the mixture of inert and reactive gases and the pressure in the vacuum chamber for magnetron sputtering, the constancy of the ionic current flow nozzles and partial reactive gas ion-beam sputtering.

Formation of the control actions performed by the modified PID (proportional-integral-differential) law. The parameters of PID controller are used: the gain of the proportional part of determining the depth of feedback, the time constant of the integrator, differentiator time constant, limiting the rate of change of gas flow, the value of the minimum and maximum gas flow rate, gas flow values for extinction of the discharge or arc breakdowns, etc. The adjustment range of control parameters can ensure the stability of the deposited flow better than 3% even in the case of branched gas supply systems of working gas in the discharge zone.

Use the keyboard controller allows you to select process technology, to enable the automatic or manual control, to enable or disable any of the individual leak valve involved in the ongoing process technology, change the composition of the deposited coatings by changing the gas flow rate of any leak valve in manual control mode, as well as by setting the signals sensors in the automatic control mode. For all the technical processes the controller indicates the current value of the signals from the sensors required by the signals from the sensors, the cost of working gases involved in the process technology and leak valve sensors, the control parameters. For the RS232 interface external computer can receive information about the signals and parameters of the system and act as a keyboard and display controller.

Using the controller controls the working gas flow sensors as external discharge parameters (pressure in the vacuum chamber, the ion current and the discharge nozzles, discharge voltage), and internal discharge parameters (optical emission) allows to achieve high reproducibility of the characteristics of both single-layer and multilayer coatings. The controller was tested in the ion-plasma deposition processes of a given chemical composition of the films during the formation of stoichiometric oxides of titanium, silicon, indium, zirconium, copper, titanium and zirconium carbonitrides, oxynitrides of titanium, etc., as well as the formation of films with thickness varying composition.

Get a quote
Consultation, ordering, cost calculation
Telegram
Viber
Whatsapp
Phone
More photos and video on our pages in social networks:
Our clients

The company "Technology & Supply" is known all over the world. We work with large enterprises from Russia to Canada. Find out the full geography of the market coverage and join us!

Your partner in the field of plasma surface treatment
Products
Company
Social
© Technology & Supply. All rights reserved. Powered by Websmart.